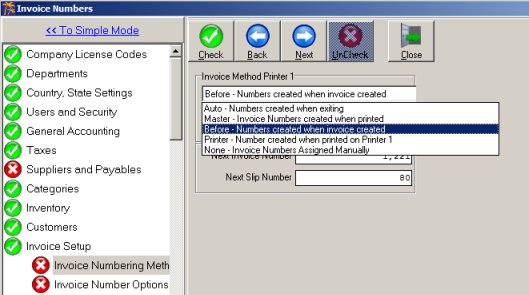 2) If the Invoice Numbering method is set to Auto - The invoice number is created when exiting the invoice. This also could cause a similar scenario as above, except that the invoice number will be assigned even if you exit without printing.

4) If the Invoice Numbering method is set to Printer - This is an outdated setting that is not used anymore with Windows. In the DOS days of System Five, We used to have 1 number sequence for printer 1, and another sequence for printer 2, so you could have 2 printers with pre-printed, pre-numbered invoice numbers. Again this setting is not supported under Windows Operating Systems, as Windows no longer supports this setting.

5) If the Invoice Numbering method is set to None - The invoice number will need to be created Manually. This method will create all invoices with the number ASSIGN, and you will need to open each invoice and assign a number to them.